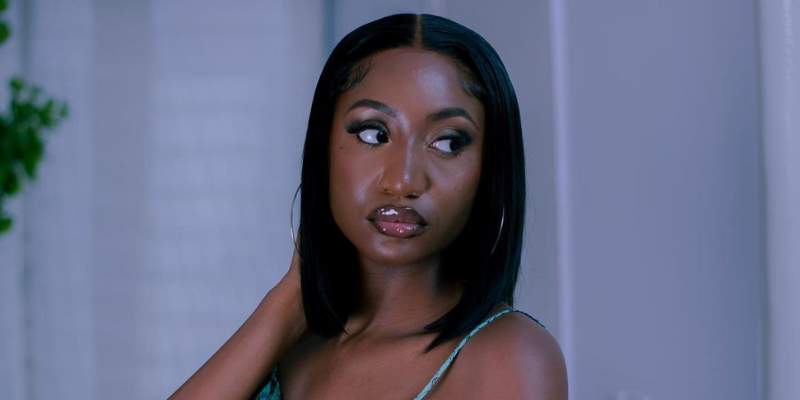 How did you get into the music industry?

I was doing covers on Soundcloud. I think the first song I ever did was a cover of Kanye West’s ‘Theraflu’.

That’s a rap song. You were rapping?

Yes. I only rapped before. I experimented with singing my choruses, but I started singing fully when I got signed and moved to Lagos.

What made you decide to move?

My brother was friends with MI, Ice Prince and the GRIP boys — Endia, Yung L, Chopstix. I got to see them move to Lagos and become known all over Nigeria. Seeing that opened a door in my brain, like if I put in the effort I could do it too.

Tell me about your Lagos move.

I had just dropped my second EP, which was still mostly rap. Then I got signed, and they wanted me to experiment with singing. Before then, I felt my destiny wasn’t in Jos, but I was looking for a solid reason to leave.

The record deal, which was very serious with documents and legal agreements, presented itself and it was something solid to show to my family that I needed to move. The deal didn’t end up working out for a bunch of reasons, so I decided to go independent.

So how have you found being independent?

Very challenging. A lot of self-funding. Although I also got funded by a company at some point. I distribute my own music and that gives me direct access to my funds instead of waiting for a label to give me access. It has been important that I invest in myself.

For example, after I worked with Budweiser, I immediately used it to shoot a video instead of flexing. I want to flex, but it is the price you pay.

What exactly are you paying for as an indie act?

One of the most expensive things is shooting videos, and they are important. When I check the backend, it is the songs with videos that perform well in streaming terms. If any brands are approaching, they can tell if you are right for them or not from your look in your videos.

You also need to promote your stuff. You can go the organic way but know that if you are not signed to somebody that is actively working towards getting you attention, the algorithms are not going to work in your favour

So how much is a video?

There are no fixed amounts. There are those who use ₦50k, but you can imagine what that would look like. Although some artists have access to certain things required. For the rest of us, it is well known that some directors are expensive because their reputation can be a promotion for the video.

You certainly don’t do ₦50k videos.

Not yet. LOL. I have done about a million naira for a video. For a female act, styling and makeup are important and I can’t compromise on those things.

So, which is your most expensive one?

It is currently archived because I am working on something with it. It is the one with Zoro. The second most expensive one that is self-funded is “Table for Two”.

have 20,000 people who will click to watch your video, then you are a big act. Everybody else needs to remind people and you remind them with all of the little flashes here and there. Posting pictures, updating your status and so on.

What else takes money?

Branding. You have to look cool. Even if you sound street, you can appeal to cool individuals just by your branding. It helps supplement what your music may be lacking. It also helps expand your base, so you are not just tied to a certain niche.

Your photos, your styling, your hair, your shoes, your jewellery. You may rent but sometimes it is easier to buy your stuff because there are stylists that charge up to ₦200,000 a look.

Ha! How do people survive in the industry?

To be honest, most people need a side hustle. A few days ago, I started a jewellery business. I have sold 11 pieces so far.

Rihanna is your marketer!

LOL. People think that surviving in the industry has to be by questionable means, but you can find a way. And it comes one day at a time. It is not a 9 to 5. Today you might have enough to go out to a lounge or have a nice dinner with your friends and tomorrow you are thinking, “Who is going to buy my data?” It is very up and down. Having a business helps.

But a lot of people don’t start on time. People like me. Because I was too invested in being a musician, I was fine with being broke for the longest time. And I am thankful for my family. Not everybody has family members that would bail them out.

How did you get into the jewellery business?

My mum used to make jewellery, and I would watch. In secondary school, I used to fix some for her and sometimes, I would take her leftovers and make stuff for myself. I am combining pieces in my business now. Some of what I use now I found over Christmas in my mum’s box not in use.

So, on my page, Luvvbybella, I say we use reclaimed materials. And it’s good for the environment. You know, recycling rather than throwing things away.

Is there a world in which this becomes it for you and you let go of the music business?

No. I have always looked up to Rihanna even before her life took this trajectory. Just watching her, including the mistakes she made, and how she used everything to become the coolest female musician is very inspiring.

But hasn’t she left music though? It’s been years.

I don’t think Rihanna has left music. I think it is about pacing yourself. As an artist, you can become overwhelmed with music. I don’t think that is healthy and it is why some have mental health problems. You can have other dreams. You can be multidimensional.

The jewellery thing has been on my mind for a while now, but it was always a fleeting thought.

What pushed you to start?

Remembering who I was and spending a long time at home last year. I just remembered that I love creating. And it presented an opportunity to make money. Plus, my rent was coming. LOL.

Given what you know now, in terms of money, would you choose to be independent or signed?

Speaking generally, it depends on what you want. There are those who make a lot of money being artists on a national level but are not considered big artists on an international level. And that is good for them. The question is: What level are you trying to be on?

What would you prefer to do if you were starting out today?

[Pauses] I would prefer to find the right team to take me towards my global vision.

Well, can you name a global artist who’s independent?

There are all kinds of deals. You can be independent and have a distribution deal or a management deal or a licensing deal. It may also depend on what comes your way. That you want it doesn’t mean you get exactly that. Do you and watch out for opportunities.

We spoke about how money goes out. For you as an indie act, how does money come in?

Last year, it was mainly through streaming. I used TuneCore for distribution. Even if it’s trickling, before you know it, you have withdrawn $500, $1000, $2000 and so on. When you add it all up, you can use it to do things. Then, shows. I wasn’t open to doing shows early last year but that changed.

With shows, you make more money than streaming and it’s faster.

Maybe not for Davido, Burna Boy, Wizkid. Their streams are probably mad crazy. For me, streams take time to accumulate but shows can pay you right now. If you are getting paid ₦500,000 or ₦1,000,000 for a show, to get that amount from streaming that would be a significant number of streams.

I try to save enough to survive. And then I also save towards projects. But that usually requires bulk money coming in, otherwise I’d be saving for too long. For really major stuff like buying a house, for an independent artist, your money won’t have gotten there yet. Depends on your level, though.

So, is Bella buying a house?

LOL. No. But I was really into shooting music videos last year. And besides that, because we are in Nigeria, you may need to pay to get some attention.

With all the things one needs to deal with, do you think people should be trying to get into the music industry?

Yes. If you really want it. But you must start with what you have. You never know who is watching.

So, what next with Bella Alubo’s music?

I am completely silent about that.

Be nice. Give us something.

LOL. All I can say is that there is new music coming soon.