Chinedu Johnson On Making Money Off His Art & Brand 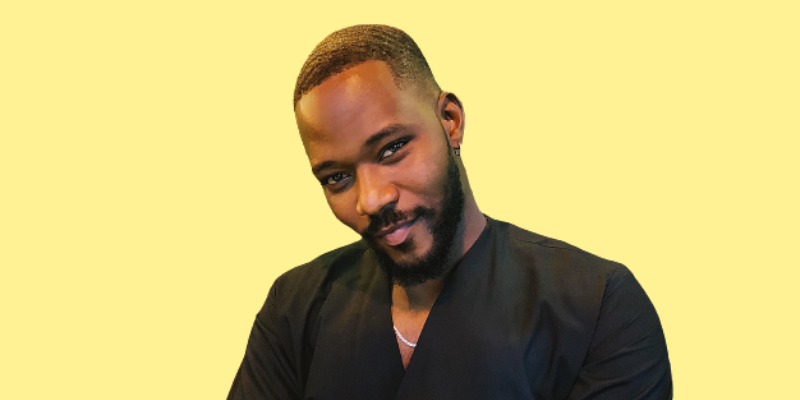 Chinedu Johnson is a 28-year-old multidisciplinary artist and model. He talks to us about selling his first piece (a hand-painted denim jacket) for ₦2,500, trying his hand at a bunch of things — from fashion to murals to NFTs — and the benefit of having a strong brand.

How would you describe what you do?

I’m a multidisciplinary artist and a model. I used to just call myself an artist — when I only did visual art — but I recently started doing digital art, too. I use art to express myself, and I also love expressing myself through fashion, hence the modelling.

When did you realise you could use art to express yourself?

I was 12 when I realised I loved drawing. I used to feel such a sense of excitement and freedom whenever I drew; during and after the process.

What kind of stuff were you drawing?

Mostly Supa Strikas. I think everyone tried to draw that comic at least once.

The funny thing is I was tracing at first, not actually drawing. I would put kerosene on a piece of paper, place it over the comic and trace. Thankfully, an older neighbour who could draw saw my work and told me to stop tracing.

For whatever reason, he saw my potential, and that pushed me to leave the tracing paper behind and start drawing properly. I was about 13 or 14 at the time, and that changed everything for me.

When did you realise it could bring money?

Towards the end of 2016. I was in my final year of uni, where I studied Computer Science. I focused all my energy on doing well in school, and I did. So, I told myself that since I was about to graduate, I might as well pick up art again.

The first thing I made was a hand-painted denim jacket; solely for me to wear. When I wore it to school, people loved it. Then my friends began asking me to make jackets for them, too.

How much did you sell the first one?

Come on. We all started somewhere.

Ah! For a denim jacket you painted by hand?

See! Jacket that I went to the market to buy and still painted.

You were nice o.

At that time, it was more about acceptance and validation for me, not money. I just loved seeing people wear something I made. It was a great feeling. I still laugh when I think back at that price though.

Please, tell me the price went up eventually.

I got to make jackets for other celebrities, like Adekunle Gold, Falz and M.I. Then the price went up to ₦20,000, and I kept it there for a while to still make it accessible.

So, it was like a proper business at this point?

Yeah. It’s what became Popartii, a collective of talented artists who work on individual and group commissions. We started off with the jackets, but we now do more than that.

We work on murals now.

Oh nice. Wait! Do you still make the jackets though?

Yeah, but not as frequently. They now go for about ₦100k, unless you’re a returning customer. I realised how much time they take to make, so I only do them when the pay is worth it.

Otherwise, I’d rather spend that time working on something else.

ALSO READ: How Chigozie Obi Monetises Her Art And Her Acclaim

Fair enough. So, tell me how you went from jackets to murals.

A stylist I had collaborated with set up a meeting with a woman he wanted me to work for; I had no idea what the job was. When I got there, the woman began showing me walls she wanted me to paint. I was terrified, but I kept my calm.

I just took it as the push I needed to step out of my comfort zone. I started getting excited, but I was still shaking. The woman now had an American accent on top, which somehow made me even more nervous about fucking up.

LMAO. I can imagine.

I wasn’t even sure how much to charge her, but I came up with a number and she agreed. I ended up spending most of the money on supplies. I was so eager to do a great job that I wasn’t even thinking about making a profit.

Then I went there with my guys, and it took us about seven days to complete it. The woman was also really nice; she’d come to check up on us and bring food. She didn’t even realise it was our first time doing a mural until the last day.

Thankfully, she loved what we did. That job opened a lot of doors for us.

It’s a store in Lekki, so a lot of people saw it and reached out to us. We were hired to paint our second mural a week or two after we finished that one. And this time, making a profit was actually on my mind.

I knew how to charge, what I needed to buy and where I could cut costs.

Where can we go to see some of your murals?

My favourite ones are in Lagos Continental and the Evercare Hospital, Lekki.

If I wanted you to do a mural in my office, how much would it cost?

It depends on the dimensions of the wall, the design and how long it will take.

Let’s say it will take a week.

Between ₦300k and ₦500k, but that first mural only took a week because we were new to it. Now, a typical mural takes just a day or two at most. If it’s going to take a week, then it’s probably because of the size of the wall and the complexity of the design.

Oh ok. What’s the most you’ve charged for a mural then?

LMAO. What other way does your art bring you money?

NFTs! I started trying digital art to tap into the web3 movement; it’s clearly here to stay. Personally, I was tired of doing commissions and not having as much creative freedom as I would have liked.

NFTs changed that. I saw artists creating exactly what they wanted to and then selling it to buyers who resonated with their work. So, I picked up my iPad and started practising. I officially started creating NFTs in November.

Love that for you. What about modelling? Do you still do that?

Oh, yeah. I still model, and my work as an artist has added value to my name and brand. Back then, all I brought to the table as a model was a fine face and my height. Now, my time is worth more.

I mean, the time I spend modelling could be used to make an NFT or paint a mural, so I have to think about that when I’m charging. I also need to actually like the brand. But, yeah, I genuinely enjoy modelling.

How much do you charge?

I used to charge per look, but when I noticed how many hours I ended up spending at these shoots, I started charging for my time. If you want me at your photoshoot for a minimum of 3 hours, I charge ₦150k. And if it’s more than that, it starts going up.

How much were you charging when you were just a “fine face without a brand”?

₦50k, and I’d spend the entire day there o. I don’t have any regrets though. It all led me here; it’s part of the process.

Any advice for up-and-coming artists?

Keep working. Keep improving your skills. Keep learning. We all want to make money, but creating is the most important thing. If money is your driving force, your work won’t be authentic.

Just create from your heart and the money will come.