DJ Diamond On Building A Career Beyond Her Blindness 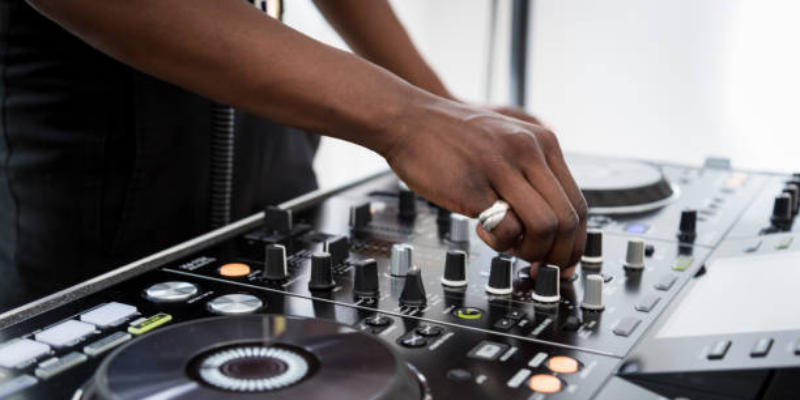 Tolulope Oladepo is the head of Nicky Diamond Entertainment, a company that provides sound production and DJ services. Recently, we spoke to Tolulope, known professionally as DJ Diamond, and she talked about powering through her visual impairment, her love for sound production and the benefit of saving, which, as you can imagine, we are happy to share.

Why did you choose “Diamond” as your DJ name?

After school, I attended a sales programme and my coach called members of my group “Diamonds.” This was around 2017, and I hadn’t yet started my music production business. I liked the name, so when I started my business, I called it Nicky Diamond Entertainment. I use DJ Nicky or DJ Diamond for my business cards. Nicky is from my name Adenike.

Many of us aren’t doing what we studied in school. Is that the case with you?

Yes. I went to a College of Education and have an NCE, but let me explain something. From childhood, my sight was like NEPA light [Laughs]. It was fluctuating. We went everywhere and did surgery but nothing worked. They said as I got older, it would be resolved but it wasn’t. My mother was told to take me to the school of the blind and that’s where I went. This was back in the 1990s.

I wanted to be a producer, but I didn’t know how people become producers. I just thought people would go to a large house and start singing. So I wanted to own that large house so people would come and sing. But there was no course like Sound Production when I was in school. You could only get English, Music and things like that.

I chose to study Theatre Arts because I like acting and I won a few awards as a teenager. That was how I ended up there. My mum used to think I would be a singer, but I don’t like listening to myself. But I like to play with sounds.

So how did you start with sound production and DJ-ing?

I started with basic computer training, just learning how to navigate the computer, how to use Microsoft Word and other software. Then I heard about a young man called AusJ. He is like me, visually challenged and a DJ. He came to visit me in 2018 and before then, I had listened to his mixes on WhatsApp. I told him, “Come and teach me this thing.” That’s how we started.

He taught me and we continued over WhatsApp. He sent me notes and other materials to aid my learning. He taught me to use GoldWave, so I could do petty-petty editing and a little more. GoldWave is very good with editing but when it comes to music, it can only do a little. I wanted more, so I tried to learn Reaper from another member of a WhatsApp group I was in. It wasn’t fun. I think it took me about six months to learn.

So how does it bring in money now?

You know, people working on radio stations these days can record their programs anywhere and send them to the station. They just have to have it edited well. I have clients that I do this type of sound editing for regularly. They tell me the songs they want to use, the adverts, and they send me their voice recording. I put it together for their shows. We call it hyping.

What do you charge?

At least ₦15,000 for a 30-minute programme. I know people like Cobhams would receive more than that, but I am still up and coming. I can’t charge too much, so my people will not run away. [Laughs]

If I do more than just work with voice and songs, I charge at least twice that figure.

Sweet. How did you land your first customer?

It was through a friend. They were commemorating Disable Day and sent me a PDF with what they wanted to say. Then, they added that they needed some music to go with the celebration.

That was my first gig. Then, a friend came and said he wanted an ad for his honey business. Then a while later, radio presenters started to reach out.

How much was the first payment?

I wasn’t able to charge much because it was a useful programme for us. But even the little that I charged they didn’t pay. [Laughs]

When I say I don’t do pay-after-service, just know that I have learned a lot. [Laughs] I think the very first payment I got was ₦25,000 and it was for hyping.

At what stage did you feel like you were becoming successful with your business?

Whenever I listen to that tape, I am impressed with my work. I really did it. We made six figures in one night!

[Laughs] It was a long time ago.

Do you have staff?

Yes. But mainly for my training business. I teach people with visual impairment and other disabilities. I teach them braille, I teach them how to use a computer. I have staff for that. For my DJ business, I have boys who monitor the surroundings and help with equipment.

But I do most things myself. I enable screen reading on my phone. That is how I can use Facebook, I can tweet, I can do anything. When it comes to money, I use an app called Cash Reader. It will tell you the amount of money you have.

I adjust the currency setting to NGN since I am in Nigeria and I point my camera to the cash and it will announce the particular denomination. But concerning my sound work, I like to edit, and I don’t think I would give that up even if I have billions. I don’t know sha.

Don’t worry. When you have the billions, we’ll come and ask.

So what are your major income streams these days?

Are there any challenges with your business?

I am shy. [Laughs] Otherwise, I would advertise on Facebook and other social media platforms. People have been saying that I should do ads, but I am still thinking about it.

I have also had issues with money. Expenses just appear and wipe off the money I have earned. That’s why I started thinking about saving. I used to do the manual contribution but I thought, what if the person holding the money dies, what happens?

So I started with an app and it was amazing. Then a friend came and she was using PiggyVest. We call it “kolo” in Yoruba. She explained how it worked to me and that’s how I downloaded and started using PiggyVest.

We are happy to hear that!

[Laughs] I’m happy with your app, too.

Yes. Two lessons. It is important that you have someone to look up to, regardless of status. AusJ is really young, but he had a lot to teach.

It is also important to learn how to save because I believe not every millionaire embezzled our money or did something bad. It was when I started saving that I realised that if you discipline yourself, you can build something. And, at the end of the day, all the money you have saved will be yours.