How Chigozie Obi Monetises Her Art And Her Acclaim 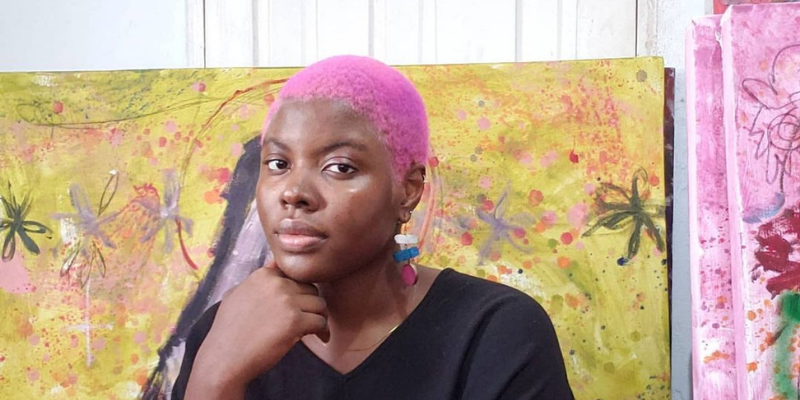 At 24-years-old, Chigozie Obi is one of the most celebrated visual artists in Nigeria right now. We got to speak with her about how the price of her art has changed over time, her preference for creating for herself and her ever-growing confidence in her own abilities.

What was your introduction to art?

I had my introduction in high school. Fine art was one of the subjects I did better than others, but I didn’t do anything with it. Then a year before university, some family friends saw my drawings and encouraged me to tell my dad to let me study Visual Arts.

He initially resisted but later allowed it. I ended up studying Visual Arts at the University of Lagos.

Did studying Visual Arts pay off?

It wasn’t like we were taught so much at the university. But when I went for my industrial training at Universal Studio Art in Iganmu, I really learnt a lot.

What happened when you returned?

When I came back, I focused on doing my own work. I was still doing assignments, but I was not just as focused on them anymore.

Ha. What did this mean for your grades?

It was okay. Nothing great. Mostly Cs and Bs. The As came once in a while.

And after graduating, what happened?

I did NYSC and went back to the studio. I stopped going after a while because I didn’t want anybody’s work to influence mine.

What did you do for money at this stage?

Art. I started selling paintings in my last year at uni, so from that point on, art started to support me. I also asked my dad for money sometimes when things were too tight.

At this stage were you living with your folks?

No. I had moved out. The money I was making wasn’t anything big. I was basically living from hand to mouth.

Still, you were paying Lagos rent with your art. Impressive!

Not really. In university, I worked as an instructor for a paint and sip event but that didn’t last.

I don’t think I’m really cut out for working for people. At some point, I just said no. I wasn’t doing that anymore.

Interesting. How much were you selling paintings for at the time?

It’s hard to talk about my prices now. It’s just a bit different for artists.

Alright. What was the next big thing that happened for you after school?

My work became more personal and I started to post more online, which helped with recognition. I started getting invited for things. I had several exhibitions, including one at The Yemisi Shyllon Museum. And then there was the ArtX win.

Speaking of, how did that happen?

If you are an artist in Lagos, you know about ArtX. I had attended most of the editions, maybe except for the year it was virtual. I knew they had a prize. I applied the first year and by the third year, someone sent it to me and told me to apply. I did.

I was very surprised when I got nominated and then I won.

ALSO READ: Why Renike Left Her 9 To 5 To Focus On Freelancing

What did that do for you career-wise? Did the win pump up your prices?

Yes, it did. But I had been increasing my prices before then. I had an exhibition in LA. They sold my work in dollars and I increased my prices in tandem with theirs. That exhibition gave me a bit more confidence since they had put my work up and were able to sell them at those prices.

Then I won at ArtX and at the Future Awards. I also had two exhibitions and sold out at both of them. All of these were the confidence boosters I needed.

You are living the life!

Prices are very esoteric in the visual arts space. Besides these external markers, what are the internal markers?

When I found myself becoming better, I figured the prices should reflect that. Then with the way the cost of materials are increasing as well, that, too, reflects. You also have the time you spend as an artist affecting the cost.

Some people haven’t spent so much time as artists, but they put high prices on their work and sell. It’s really a question of recognition, confidence and luck because a lot of people work hard and have very good work, yet they haven’t been able to hack this area.

Really? So if you spend a week on one work and you spend three days on another, is there a chance that the latter is more expensive than the former?

Time can matter, but it’s about the workload. If I need to buy more material, I would factor that in and try to make a profit, just so I say I have made back what I put in. I try to price my work by sizes. So works of similar sizes usually align, so my prices aren’t all over the place.

But other things can also affect it as well, like the connection I have to a piece. It really depends on each artist.

Do you take commissions?

I used to, but I’ve never really been that person. My favorite type of work is one that I do by myself. But…

If the money is very good…

Hahaha. You will accept.

Yes. I will consider it. [Laughs]

What is very good money, Chigozie?

Plenty of millions o. [Laughs] Depending on the size and subject matter. But if they are not willing to pay, it is not worth my stress. Some people come with good prices but what they want is too stressful.

You can tell just by talking with them?

Yes. I’ve done some commissions that paid well, but I ended up nearly falling sick. Sometimes the time is short, sometimes they request for a lot or are too unsure of what they want.

You are certainly not at the stage where you would die without their money, right?

I’m fine now. But if someone comes with ₦10m for a project that wouldn’t stress me, I will consider it.

Hahaha. Did you get the talent from your family?

Not really. My mum was a gardener and I like to put plants in my work because of her. But neither of my parents is a fine artist.

Is there a way you plan what you do with your income each month?

Is that possible these days, considering your profile?

It could happen. [Laughs]

LOL. Has it happened though?

That’s what I thought!

Looking at your entrepreneurial life, what would you advise younger visual artists?

It is not really easy for artists, so I would say to save and invest when you can. When you are more stable, you are able to save. But the truth is, I don’t think I have honest advice, given my own experience. Save but don’t feel too bad if you have to dip into it from time to time.

What is the most expensive work you have sold?

Speaking of, your price money for the ArtX competition was ₦1.8m. What did you do with that money?

LOL. A lot of it is going into my solo exhibition at ArtX in November this year.