How Dare Olaitan Turned His MBA Fees Into A Nollywood Career 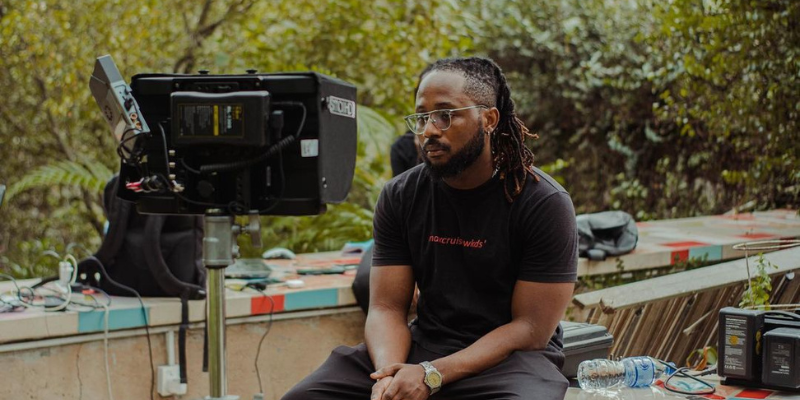 Acclaimed Nollywood filmmaker Dare Olaitan is the man behind Ojukokoro, Knock Out Blessing and Dwindle. Ahead of his forthcoming film, Ile Owo, he spoke to us about the Nigerian film industry, his thoughts on creative risks, and how he used a quarter of his business school fees to launch his career as a filmmaker.

How did you get into film?

When I was nine, I stumbled on a book about film, and I was immediately interested. When I started taking it seriously years later, there was no place to figure it out and no one to ask. So I thought I’d learn about money.

I knew movies needed money to be made and that was enough. So I studied Economics and did something on emerging markets as my final project. I did research into Nollywood and this was around the time Ije was made.

That’s the Chineze Anyaene film with Omotola and Genevieve, yes?

Yes. She was a film school student and it was her final year project. I think it made a ridiculous amount of money. I watched it and thought I could make something better.

I was pretty young. I thought I’d make a film and see what happens; if I fail, I fail. But my folks thought there was no way to do it without an education, so I went to film school in Colorado. I came back, did some things in the industry and made Ojukokoro.

How did you work that out?

To be fair, it seems reasonable.

And I’m very stubborn when I want something. They probably thought they’d let me do that and then I would come back and face the real world. But it blew up in their faces.

You are killing me! Did you use exactly a quarter?

It cost a little less than that. I tried to make Ojukokoro with as little money as I could. It was never meant to go to cinemas.

That’s interesting. Where then would it have ended up?

I wanted to sell it to Amazon. But I did it to prove to myself that I could make a film. It was while figuring out how to do Amazon that I met my producer, Femi Ogunsanwo. He had put his film on Amazon.

How did your folks receive the film?

They loved it. They are really supportive.

Was the film a financial success?

Yes. But it took a while. Since then, I don’t think I have spent a lot of new money. I have used the money from it to make my other films. I have turned one-quarter of an MBA into four films.

But wait first. What is one-quarter of an MBA exactly?

It cost less than $12,000 for principal photography.

What took most of the money?

I should explain that because I write my films and have worked for some time in the industry, I knew how to avoid costly things. For instance, there were no night scenes. I didn’t have money for lights. Also, my dad has a petrol station…

I recall the entire film is mostly shot at a petrol station.

Yes. Because it is my dad’s. That reduced location costs. But you still have to pay for things. I think the major cost was the crew, then actors and then accommodation.

And you have done several films since then?

Yes. I also produce my own films.

What about your parents and your MBA?

They know this is what I want to do. Wetin MBA dey do for person? Everything I was doing was to be able to make enough money to make films.

ALSO READ: How Much Does It Cost To Make A Nollywood Hit?

God bless your clarity! Have your budgets been bigger?

Yes. There are things I want to do now.

Is it more about ambition than inflation?

Let’s talk about your new film, Ile Owo. What is it about?

It is about hierarchies and social status and the effect of money on people. What if you marry the person you thought was the best person for you but this person is actually not?

That’s an interesting theme but a vague synopsis…

[Laughs] I’m not great at explaining my movies.

[Laughs] I know too much and I’m not sure how to not say too much.

Okay. Let me see if I can help. What is Bisola’s role? She speaks creepily and looks like she’s on a mat in the trailer.

She is a sorceress trying to help a man get what he wants. But things take a course that isn’t exactly clear.

Hmm. Is this your favourite film?

So will viewers who saw your first film like this?

I think so. I like to do genre films. Ojukokoro was like a heist action film. This is psychological horror.

When is it out?

What took most of the money on this film?

Actors, technical crew, locations and set design. This film had to look a certain way. In my first film, everybody wore the same clothing because the story takes place mostly in one day. I can’t do that type of film anymore.

Well, if I wanted to show a woman married to a billionaire, there is a way she should look and a way they should live.

True. Do you pay yourself? How does that work for you since you are director, writer and producer?

It takes me two years to pay myself. My money is usually waiting. [Laughs]

Are you still financing wholly by yourself?

Yes. But not for this film. As I have grown in the industry, I have found like-minded partners. I have worked with Kayode Kasum and Film House as co-producers.

What does this mean in practice?

Depends on how it is structured. You get your equity contribution.

Do you ever have to do backend for your actors?

No. Everybody gets paid upfront.

What are the avenues for getting money back?

Which is most lucrative?

VODs are the most lucrative for everybody, I think. If you add Netflix, Amazon and the others.

So, why should we come and see Ile Owo?

Because it’s different, although I know everybody in Nollywood says that.

But Ile Owo is truly different.

So you watch enough of our films to say that?

I think I can say that, although the first Nigerian film I saw as a full adult was Ije. I didn’t really watch our films.

Yes. I work here. I need to know what the competition is.

Because of certain things, we are very risk averse in terms of storylines and in general. Even casting. I think creativity comes from taking risks and we can’t keep making the same things. I saw a film recently called King of Thieves, and it was so good, so different. And it has made more money than anything else from Nollywood this year. Ile Owo is also different.

Who are the stars?

There’s Temisan, Sophie Alakija, Bisola, Efa Iwara and others. Our lead is an exceptional actress. She has been in the industry for a while but this should be her breakout role. Her name is Immaculata Oko-Kasum.

Looking forward to it!

Yes! Thanks. We’ll have a premiere and then everyone can see it from June 24th!