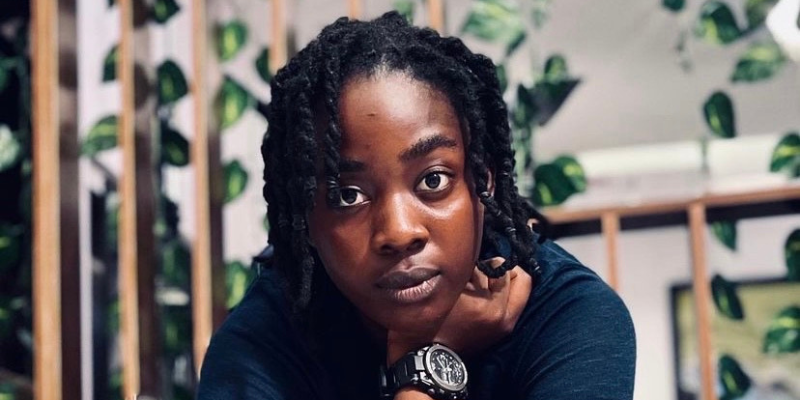 Gail Chukwu is a 25-year-old indie filmmaker and screenwriter. She owns Gail of Lagos Productions, a filmmaking company, and has a few short films in the bag. In a conversation with PiggyVest, she recounted her tumultuous filmmaking journey and shared some advice for aspiring filmmakers.

I have a Computer Science degree from UNIZIK.

Interesting. How did you go from computer science to filmmaking?

[Laughs] I’ve always loved to write, but my first foray into screenwriting was in 2016. I honed my skills until 2018, when I first got paid for a script. But I wanted more. So in 2019, I packed my bags, left Anambra and relocated to Lagos.

The city that never sleeps.

Yes. I came here with lofty dreams, but I first had to get a job to pay the bills. That’s how I started to work at a writing company as a ghostwriter. This lasted two years, and during that time, I ghostwrote a few screenplays.

So screenwriting was your first love?

You can say that.

How did you segue from that to filmmaking?

I think it hit me that I wanted to be a filmmaker when I started to visualise my short stories more. It all started to appear in pictures. It’s quite embarrassing when I think about it now, but I would find myself in the DMs of filmmakers, asking them to shoot my stories.

Shortly after I left the writing company, I shot my first film: Love Does Not Look Like This. Then I got admitted into the EbonyLife Creative Academy to study Film Directing.

How was that experience?

It was empowering. I learnt a lot and met some amazing people.

Lovely. How has the journey been so far?

My God [Sighs]. Let me just put it this way: I’ve suffered. I’ve seen shege. It has been hard. Really difficult. I’ve had bad moments, in fact, I don’t think I’ve had it easy since I began.

I’ve battled imposter syndrome, failures and bad review meetings. I have had little wins, but I’ve not yet experienced that big win. But people have told me that the first few years are like that, and it gets better. So I hope this ‘better’ comes soon.

Does this mean you’ve thought about throwing in the towel?

Yes o. Many times. The most recent time was some days back. I just woke up and started crying. I guess it was a lot of pent-up anger and frustration.

One other day, I was home with a friend when I burst into tears. He was concerned and asked me what the problem was. All I could say was, “Filmmaking is the ghetto.” [Laughs].

I’m sorry. What has been your craziest filmmaking experience?

Every single experience has been crazy. But I think the one that takes the cake was during the shooting of my first film. I had written and rewritten every part of the screenplay to fit into our location, but there was this shower scene we needed to make work.

Somehow, there were no running taps at the location we had picked. I kept staring at the shower not knowing what else to do. Then I got an idea. I filled a nylon bag with water and tied it to the shower. Then I popped holes in the bag with my earring and voila! A shower.

MacGyver has nothing on you.

Where does your inspiration come from?

Honestly, there’s no who or what that inspires me. I would really like to be able to answer this question someday. Having the answer might just mean I’ve cracked this filmmaking thing.

What would you say your niche is?

Drama! I really love drama. I used to think I liked thrillers and horror, but as it turns out, I prefer the simpler things in life. So yes, drama.

How do you fund your films?

So I funded my first film with my savings. I used over ₦100k of my money to do that project. For my second film, I took a loan from a friend and eventually paid him back.

For my third film, I knew it would cost money, but I guessed it would cost around ₦500k. I had some money in my PiggyVest from the ₦5k I’d been autosaving every Monday, whether I liked it or not. It is disrespectful how punctual the autosave was [Laughs].

By the time I wanted to shoot my film, I had about ₦400k in my savings. I sent all of it to my producer. But to nobody’s surprise except mine, the money did not go far. We had to set up a gofundme, using my Flex account to solicit funds from the public.

We were able to raise the rest of the money that way.

Quite a number of them actually. I’ll spend all my money on my films and get sad, then spend more money trying to make myself feel better. I’m currently in a financial bind but I’m getting ready to go see Black Panther. Hunger is temporary but Wakanda is forever.

So will you say that money has been your biggest challenge so far?

Yes, definitely. You need money to shoot films. I also feel like I’m often the antagonist in my own story. Maybe I don’t fight hard enough, or put in as much work as I should. It gets really tough, though.

What advice would you give aspiring filmmakers?

Man. It’s hard, it really is. Unless your daddy has money, or filmmaking is a hobby you want to squander your excess money on, it will be hard. Be prepared. Don’t go into it for the money first, do it for the love.

Make sure it’s what you want to do. Make sure you’re driven by passion. If not, you’ll not be able to see it through.

What new projects should we expect from Gail?

I’m in the post-production phase of my latest short film, Tì Ẹ Ńbò. I’m also developing a new series with my producer and co-writers. So keep an eye out for Gail of Lagos.