The Cost Of Being A Nigerian Bridesmaid 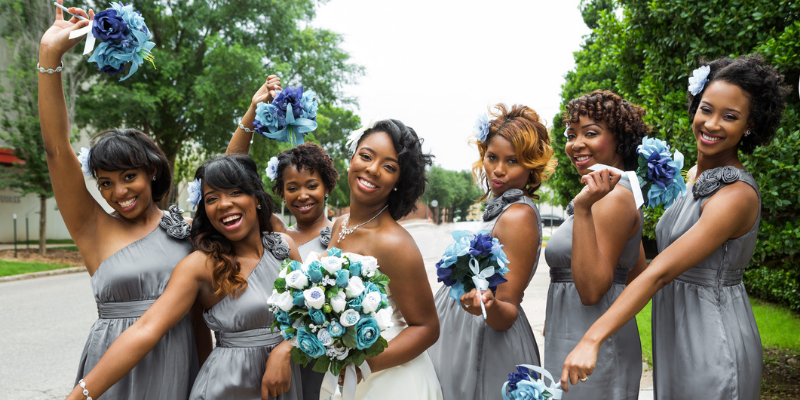 The history of bridesmaids is rooted in community. In Ancient Rome, sisters and friends would attend the wedding dressed exactly like the bride to ward off evil spirits that may want to harm her. The idea was to confuse these spirits or jealous exes by acting like a decoy. Today’s bridesmaids, in Rome and outside of it, are still part of the bride’s community, but there’s a catch for Nigerian bridesmaids: the position can be expensive.

Ummi, a 27-year-old entrepreneur, estimates spending over ₦150,000 on being a bridesmaid. “I have a wedding in October that’s going to cost me ₦150,000 – ₦200,000,” she said. This covers the bridal shower, asoebi, styling, transportation and housing logistics, as well as gifts for the bride.

We spoke to a couple of Nigerian women about the cost breakdown of being a bridesmaid.

The cost of bridal showers

Bridal showers, the mini-parties friends of the bride throw to celebrate the end of her watch as a single woman, have become a fundraising event. “I was added to a group chat and asked to pay ₦7,000 for the bridal shower of some acquaintance I met on a flight,” said Agatha*, 24. Agatha only met the bride a handful of times and didn’t even indicate interest in attending the wedding. Oma*, 27, has a friend’s wedding coming up in December. The bridal shower is costing her ₦50,000.

The women we spoke to placed the contribution range of bridal showers somewhere between ₦5,000 and ₦50,000. The exact figure is dependent on the number of bridesmaids, the logistics of hosting a shower and the bride’s wishes.

The cost of asoebi

Some women have to decline requests to be bridesmaids because of the price of asoebi. Delight*, 25, was asked to pay ₦50,000 for asoebi. “The whole asoebi thing is becoming excessive,” she said. “Why are people creating asoebi categories on other people’s money? Imagine collecting ₦50,000 from 10 people — that’s a clean ₦500,000. It’s like money laundering.”

For couples who sell different sets of asoebi for their traditional and white weddings, bridesmaids like Nonye, 27, end up paying twice. Oma, 27, says she isn’t paying ₦40,000 for asoebi because the wedding is already costing her ₦250,000.

The women we spoke to placed the contribution range for quality asoebi between ₦15,000 and ₦70,000.

The cost of styling

The biggest bridesmaid mistake you could make is assuming it all ends with getting a dress. Nigerian bridesmaids talk about paying the cost of accessories to match the outfit. This cost is different from that incurred for hair and makeup. “Pray that you never encounter a bridezilla,” said Ummi. “Someone who insists the bridesmaids have identical human hair, dresses by the same tailor and the exact same makeup look.”

Some bridesmaids are now forced to do their own makeup to save costs. “Some brides handle the cost of hair, makeup and shoes but, most times, it’s on you,” said Esther, 24. Other women, like Midun*, 26, have to deal with paying for a make-up artist who doesn’t show up.

The cost of logistics and housing

If the couple makes no provision for housing, bridesmaids who travel face the issue of large hotel bills.

The cost of gifting

To ease costs, bridesmaids contribute as a unit to gift the bride. These costs are usually included in bridal shower funds, donations to the bride or as hidden costs in asoebi. “I made a ₦30,000 donation for gifts because the bride was my best friend,” said 26-year-old Favour.

What bridesmaids would do differently as brides?

Even after facing this, most bridesmaids go on to become brides who have weddings others dread. We asked our Nigerian bridesmaids what they’d do differently as brides.

“If I’m having an out of town wedding, I’ll have an arrangement with a hotel, provide discount prices and cover 50% of the hotel bill,” said Favour.

Women like Nonye and Delight hope to cut on the cost of asoebi, while others like Esther hope to provide the make-up artist as well as spa vouchers for their bridesmaids.

What makes the cost of being a bridesmaid worth it?

The unanimous response was to make their friends happy and secure guests for their own weddings. Apparently, the idea of community is eternal. “You have to show up so when it’s your turn, they’ll show up for you,” said Nonye.

It is also about the value they place on the bride. “I am only a bridesmaid for close friends and family. My ride or die babes get a whole lot more. I will do the outfits, spray them money and even pick the money being sprayed,” said Ummi.

For others, it’s about nostalgia, bonding and intimacy. “Having those drunk talks, goofing off and reliving the memories of a happy past,” said Delight.

For Esther, being a bridesmaid is about the story, the love story. “I am a hopeless romantic,” she said. “I love love stories, especially those that I get to witness. It’s like being a part of the bride and groom’s love story.”