My Money Mistake: I Gambled Away ₦700k On Baba Ijebu 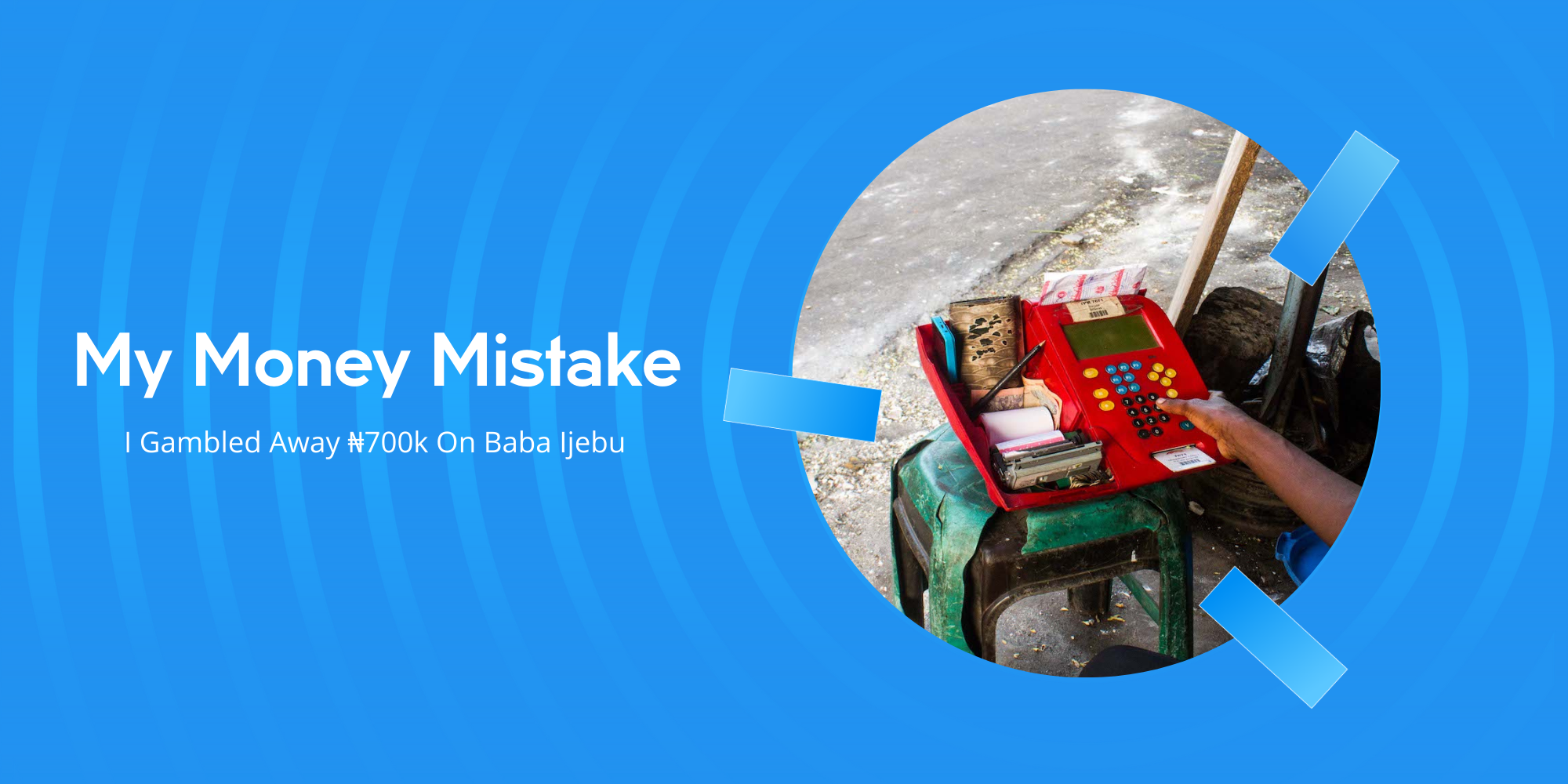 For this week’s episode of My Money Mistake, we spoke to a 37-year-old executive driver who started gambling because of his first win. He talks about gambling almost a million naira loan on Baba Ijebu and how he is paying off his debt on the salary of a driver.

In 2020, I took a loan from my workplace cooperative and ended up gambling most of it on Baba Ijebu.

How much was the loan, and what was it for?

What is Baba Ijebu?

It’s a betting game that can happen online or offline. Players are required to try their luck and guess five numbers from 1 to 90. If they correctly guess at least two out of the five numbers, they win a cash prize. They run five to six games daily. You mostly see them on the roadside with a red terminal, and If the place is busy, you’d see a line of people waiting to guess the numbers of the day. The guesses are random, but I heard there is a formula for it.

How did you find them and get into gambling?

After I took the loan, a friend told me about sports betting and Baba Ijebu. He said I just needed ₦1,000, and if my team wins, I’ll get ₦36,000. The higher my bets, the better the returns. The problem is, I have never been a football fan, nor had I ever gambled in my life.

So what changed your mind?

During the lockdown, we were all home. I didn’t go to work for three months. This friend is an older man that I speak to occasionally. He came to borrow money from me that there’s a game his relative sent to him. I had my doubts, but I gave him ₦500. He later called me after the results, saying that I had won ₦12,000.

Yes. I tried to make inquiries about how legit it was. Was a money doubler involved, or was it a joke? He told me two out of the five numbers he chose clicked.

That was how I followed him to the lotto shop at the bus stop, where they counted the money and gave it to us. I couldn’t believe it.

I was told that he only placed ₦50 on that number. If it had been ₦100, the reward would have been ₦24,000. That was how I started gambling.

How often did you gamble, and did you lose?

I lost more times than I won. I would be at work and call the lotto man to place bets. Before the results came out, I would become so anxious. I could spend ₦500 on each number, hoping for two or more clicks.

I never won up to three games. This went on for seven to eight months. It felt like a charm. I couldn’t talk to anyone about the losses — not my mother, siblings or wife.

Yes, with two sons. My wife knew I was betting, but she didn’t have context for how much or how frequently. I was hoping to make a big win one day and buy the Toyota I needed for Uber. Before I knew it, a year had passed and I had lost about ₦700,000.

At what point did you stop?

I went to visit my mother, and she was scolding my younger sibling who tried to use gambling to become rich. She told a story of a man who sold foodstuffs at Oshodi.

He got introduced to Baba Ijebu and started gambling because of his first win. He eventually lost so much weight because of the betting. The story stuck with me. I’ve seen people lose everything and never recover. I didn’t want that to be my story, so I made up my mind.

I quit and never looked back.

How do you hope to pay back the loans?

Thankfully, I got a raise at my job. I went to the cooperative that gave me the ₦600,000 loan, and I increased my savings with them from ₦25,000 to ₦40,000. Some lifestyle changes were made as well. I decided to be prudent with my spending, denying myself so many things, but I’m happy it is paying off.

I had to do it for my kids. I never got to finish school, but I want that for them. I’m hoping that when they are older, I can take them somewhere nice. I’ll buy them anything they want, and then I’ll have a serious talk with them about the things they must NEVER do. Gambling is on top of that list.

No sane and responsible person should go into gambling. It might look like a viable venture, but the man who set up the shop has a target; he is trying to make his money back. The ten kobo you win from him, he will collect more than that from you.