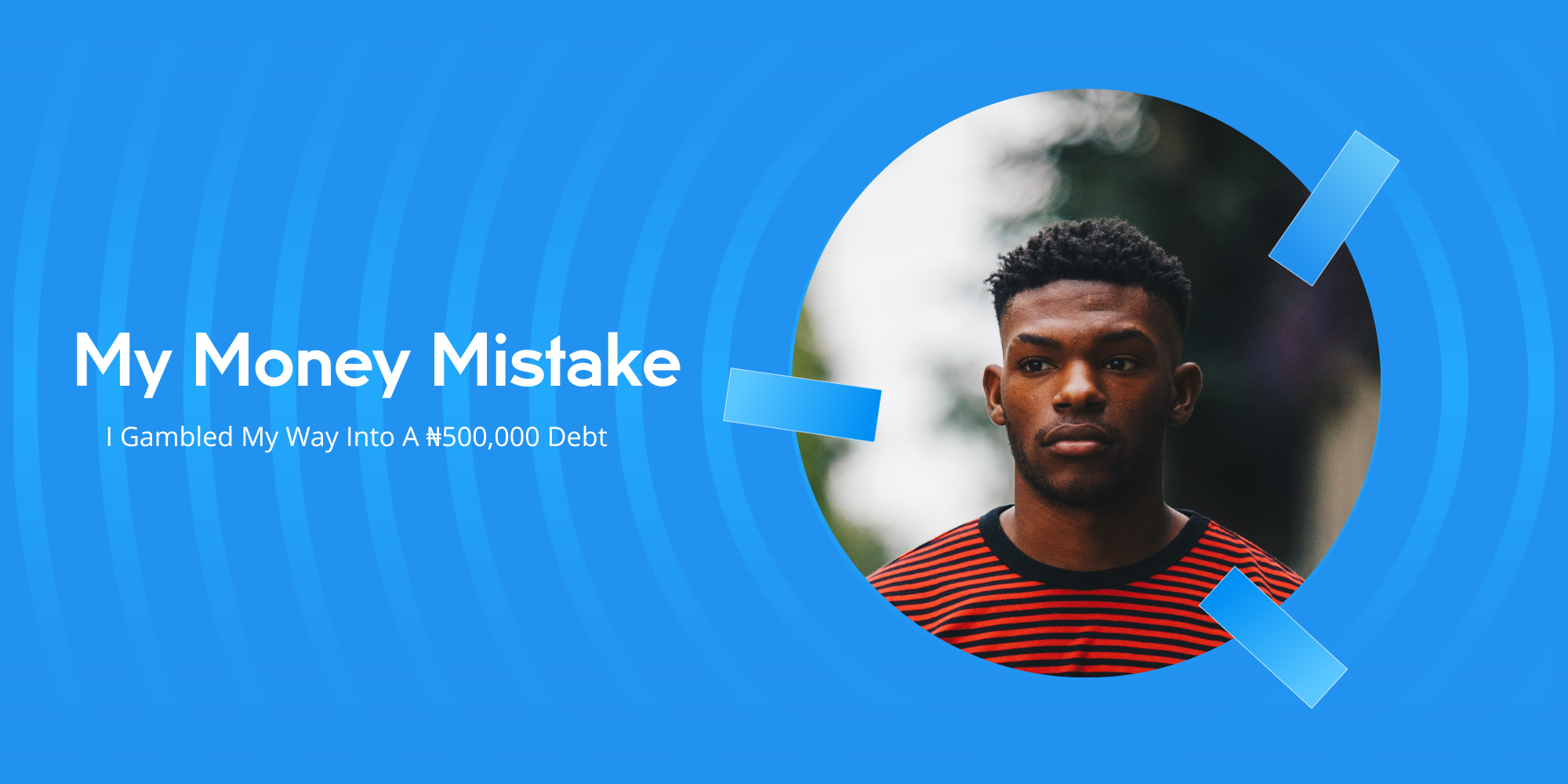 For this week’s episode of My Money Mistake, we spoke to a 23-year-old motion designer who started gambling to pay his school fees. He talks about a series of bets that grew his debts from ₦15,000 to over half a million, and how hopes of making it big kept him in a cycle of gambling.

In 2018, I threw a party with ₦15k meant for my school fees. As the time to pay up drew closer, I borrowed ₦10k from a friend and played two odd games, hoping to make ₦20k. I lost. I was a sports fan, and I had friends who were down to gamble for fun, so it was easy to get into that lifestyle.

I started promising people interest on whatever loan they gave to me. I went from needing ₦15k for my fees to having an ₦85k debt. When I realised that I kept losing money and I still hadn’t raised the fees that started all of this, I borrowed more money to pay off the fees.

Then I took a ₦50k loan and bet on a sure game, but I ended up losing that too.

How much was the school fees, and why didn’t you just borrow to pay it off rather than gamble to make more?

It was ₦19k. But I was surrounded by gamblers; I watched people bet and win and I hoped that would be me. The goal was to pay off all the debts and interest I had incurred and make a big win that would set me up. That goal started a gambling cycle I couldn’t stop.

How did you deal with the other debts you had?

My debt was growing and people were getting impatient with me. To cope, I started smoking. My grades were bad, and nobody could tell what was going on with me. But I kept gambling until, finally, I got lucky.

You finally won a game?

But, I was gambling with a friend who also had growing debts. The person that lent him some money threatened to come around and create a scene if he didn’t pay up. My friend advised that we bet the 30k bonus on another game to offset his own debt. We lost. I had to lend him 50k from the 140k left to avoid the disgrace. I used the 90k to pay off some debts but it didn’t stop me from taking more loans from people.

Omo. How did you keep getting loans when you had so much debt?

Trust. I wasn’t rich but, somehow, I was a credible person. Nobody would look at me and think I’d run with their money.

Was your family aware of your gambling problem?

No. I couldn’t tell them. How do I tell my father that I was using half my allowance to place bets? Or that I sold my laptop at a ridiculously low amount to fund my gambling habit. Nobody knew anything until an incident forced me to come clean. It was an altercation, the first of its kind.

There was a guy who wanted to sell his ₦250k laptop for ₦230k. I needed a laptop at my internship place, so I got his and promised to pay later. It was a ridiculous deal and a part of me tried to fight that decision, but I just went ahead with it.

I ended up selling his laptop for ₦50k, used the money to gamble and lost everything.

There’s no way you did that.

I did. Things escalated when he confronted me for his money. I became afraid for my life. I had to call my cousin and tell them everything. Everything except how much debt I was in at the time. I said ₦250k when the figures were much higher.

How much debt were you really in?

Over half a million naira. I knew the news would get to my family, but I didn’t want them to know how much trouble I was in.

When the news got to them, my father believed the debt was much more, but I swore on my existence that it was just ₦250k. They were able to help me resolve the laptop problem, but I had to figure out how to pay the rest of the debt. I even started borrowing from online loan platforms.

Did you ever come close to paying off your debts?

Wait, what? This is the wildest My Money Mistake interview I have ever done.

[Laughs] I made some pretty stupid decisions and it went on and on. The debts, the gambling, all of which triggered my anxiety. From 300 level to 500 level, I was never able to pay off all my debts.

How did you stop?

I had to condition myself out of gambling. When I calmed down enough to reflect, I didn’t like who I had become. I made up my mind to stop. Slowly, I weaned myself off the habit and I am better off for it.

Ask for help because you never know how big a problem can get. If you need it, reach out to people that can help. Also, believe in yourself enough to know that you can talk yourself out of any bad habit.