My Money Mistake: I Got Scammed 7 Times In 2 Years 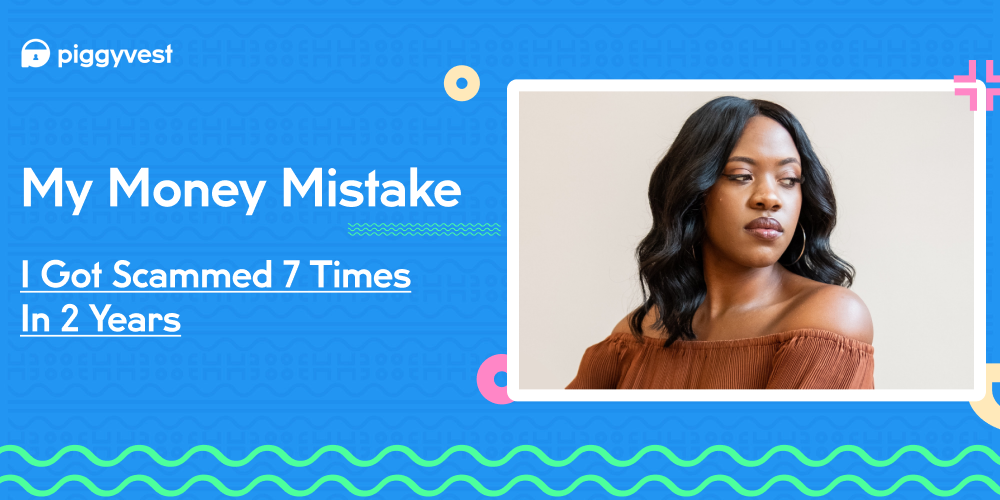 For this week’s episode of My Money Mistake, we spoke to a 22-year-old graduate who got scammed several times in a couple of years. She talks about losing four years worth of savings and all the red flags she ignored.

Where do I start? Since the beginning of the pandemic, I have made so many embarrassing financial mistakes. I’ve been scammed no less than five times since February 2020. All of which could have been avoided if I wasn’t so trusting.

That many times? How?

I was an undergraduate trying to make extra money to start a business when I came across an Instagram page that claimed to sell wholesale stock. They had clothes, bags, shoes and accessories for cheap. I sent a DM and paid ₦77,000 for goods to be delivered in three days.

When I didn’t get the goods, I texted the vendor, and she said I needed to pay a balance of ₦5,000 to get the waybill number. I tried begging, but nothing happened. After a few days, I realised she had blocked my Instagram account and wasn’t picking my calls. That was when I knew I had been scammed.

Wait. It gets worse.

The second time, hackers were involved. I was on Instagram when I saw a testimonial from someone I had modelled with in the past. She was talking about receiving a credit alert from an investment she made, so I DM’ed her on Instagram. I had her number, but it was easier to respond to her IG story.

She explained that the investment gave a 100% ROI in 24 hours. I was interested, so I sent ₦50,000 to the account she provided. Less than an hour later, she was on our modelling group chat saying her IG account was hacked and we should disregard any information on her story.

What did you do after this?

She wasn’t the one I was chatting with earlier, so there was nothing I could do. I just let the money go. The hackers even texted me later that if I wanted the interest, I should send ₦5,000 to redeem it. I was so upset, I started cursing them.

But as a student, where did you get the money to make these “investments”?

I am addicted to saving. In fact, I have been saving my pocket money since my first year, hoping to start a business with it. After getting scammed twice, I decided to leave investments and focus on importation. This was at the height of the pandemic.

During that time, I got closer to some guy I met in 2019. He claimed to be a forex trader and I was interested in learning, so he charged me ₦10,000 to teach me.

That’s not so bad.

He didn’t teach me anything. Just random stories that didn’t match what forex was supposed to be. After waiting three months, I got angry because I wasn’t practising anything. I started putting pressure on him, so he introduced me to one app, Bingo, and said it was for trading.

I’ve never heard of that app.

I was just happy to practice. I felt since it was an app, it had to be legit. After making a ₦30,000 loss, I finally made ₦17,000 profit. Oya, time to withdraw, and it refused to pay. That was when I learnt it was a Chinese app that didn’t pay Africans.

Ha. What about the guy who introduced you to the app?

He apologised and said he didn’t know. He claimed that his guys in Lagos were getting paid. It was all lies. He knew he didn’t teach me anything in forex, and I would have caught him if he had recommended a proper trading app.

How did the relationship progress from there?

I forgave him. Then he scammed me again.

He later came to me with a pitch on phone importation. It sounded like a profitable idea, and I was so naive. I couldn’t think of any way it could go wrong. I got a friend on board, and we gave him ₦160,000, combined, for the business.

We waited from July to December but didn’t hear from him. The person I brought on was getting impatient and asking for his money. It was so embarrassing because I vouched for this guy and the business.

I had to speak to a mutual friend who then gave me the tea. It turns out my guy was an unserious fellow who stayed home all day doing nothing. He would come to their house and just lounge. He wasn’t importing anything.

Omo. Did you get the money back?

I had to. Someone else’s money was involved, so I pulled out all stops. I got a ₦90,000 refund and used it to settle the other person. I invested about ₦60,000 and never got my money back.

This is just terrible.

I should have known better. I was too trusting because I felt a friend was involved. It’s still this same trust issue that led to the next scam.

Last October, a shipping agent with good referrals from credible clients posted on his status that he had iPhone XR phones for ₦130,000. I was already importing things from China, and this guy came recommended by someone I trusted. It was a no-brainer to buy these devices at this price and sell them at ₦210,000.

But shipping that should have taken two weeks took three months. He wasn’t replying to messages, so I texted the guy that connected us. It turns out I wasn’t the only one. The guy just stopped replying to everyone and ghosted.

This was the fifth scam, yes?

Yes, but I didn’t know it was a scam. In July, he came back and announced that his agent ran away with his goods and he was sorting out refunds.

When I confronted him about my money, he apologised and gave excuses about how he’s been depressed since the whole thing happened and wanted to make things right. For context, things like agents running off with goods are quite common, so I didn’t really hold it against him.

Later, he updated his status with new phones –iPhone XR – selling for ₦90,000. I hit him up that I was interested but didn’t trust he would deliver. So, he said since he owes me, he would give me the phone at a discounted price of ₦36,000.

Did you do it?

I was conflicted because I knew people who had used him and he came through. I asked a friend for a second opinion, and they said if the discount was too good to be true, it might be a scam. They asked if I was willing to risk it. Considering how much I had lost in the past, ₦36,000 didn’t seem like a huge risk, so I did it.

We kept in touch, and he was always replying on time. After a few weeks, he said his shipper was going to clear the goods. I was so happy. Finally, something clicked. After three days, nothing. I texted him to send the shipper’s number so I could waybill the goods to Abuja. This man aired me. He didn’t block me cause I could still see the double tick on Whatsapp.

Did you pursue the issue further?

We are desensitised to scams here. It’s such a normal thing. There is no way to track anything, and the police won’t help either. They’ll just take your money and ghost you. The whole thing is so frustrating. You don’t even know who to trust.

My most recent and last scam episode happened in August this year. It came from a source with a large following on all social media platforms. He advertised a guy as a forex expert. I was interested in learning so I contacted the guy and paid ₦30,000.

When it was time to learn, the guy claimed he was ill for over three weeks. Most times, he left me on read. Till now, I haven’t gotten value for my money.

Sigh. Are there any lessons you’ve learnt from this?

Yes. I shouldn’t have trusted word of mouth so easily. Also, the fear of missing out made me make rash decisions. I kept thinking that opportunities would bypass me if I didn’t take them. This has led me to make a bunch of silly mistakes that could have been avoided. I know better now.