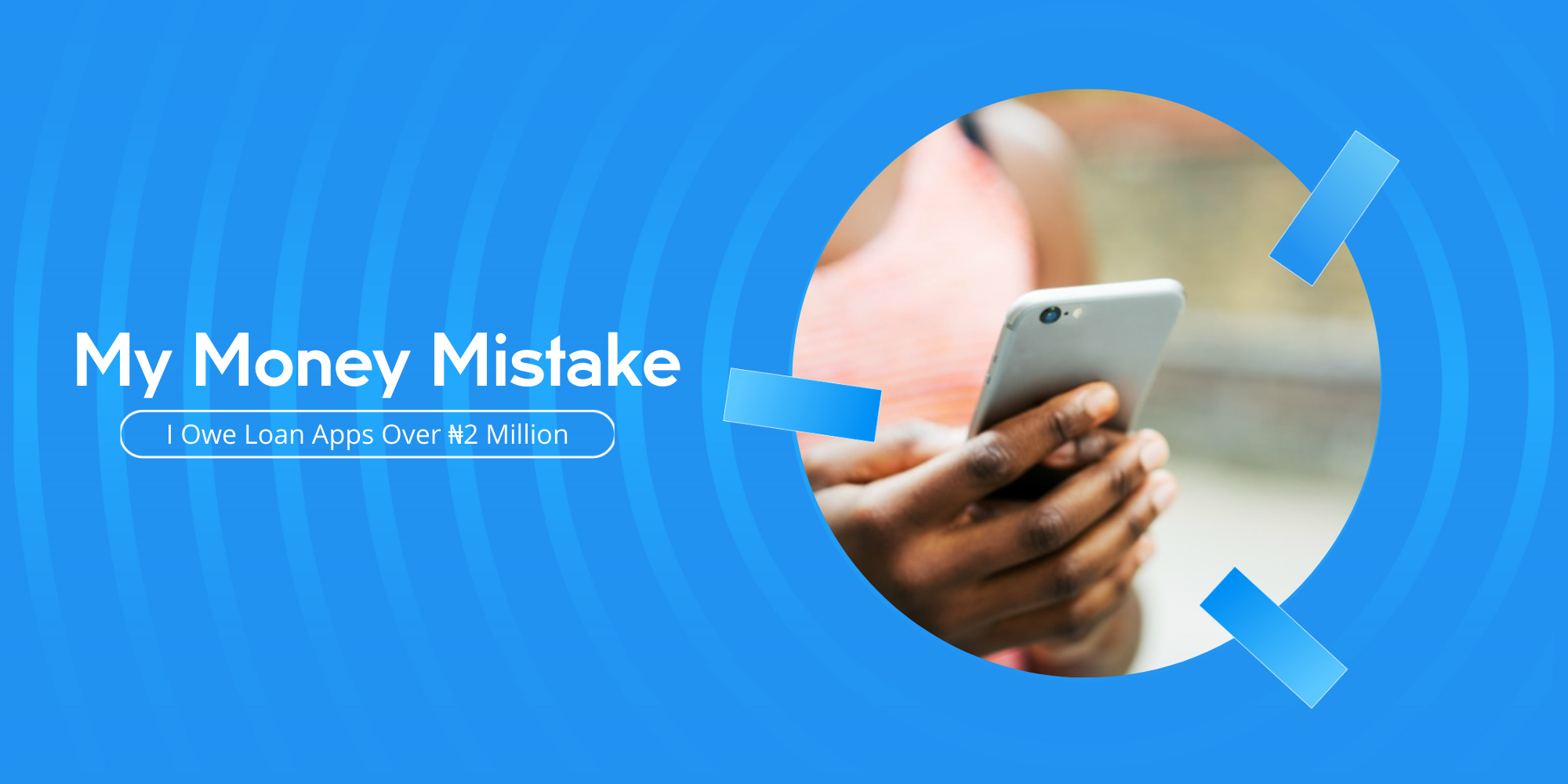 For this week’s episode of My Money Mistake, we spoke to a 28-year-old salesperson who incurred debts of over ₦2 million from loan apps. She talks about keeping her debts a secret from her family and her struggle to pay them.

In 2017, I had just finished my masters, but I was unemployed. Still, I regarded myself as a prudent person who didn’t spend needlessly. I didn’t know how much I’d nosedive into funds mismanagement.

I saw an ad for an app that promised “quick loans.” Out of curiosity, I used the service. I took a loan of ₦5,000 to test it out. In less than five minutes, I got the money.

I figured it was a good initiative for people with no access to bank loans or who didn’t want to disturb their family and friends. I quickly paid back the loan and the 15% interest. Everything was ₦5,500.

That’s not so bad.

My problems began when I started taking out loans to help friends. Back then, I had a boyfriend who needed money. I didn’t have a job or access to funds, so I would go to these loan apps, borrow money and give it to him.

I borrowed so much money from them that by December 2017, I was upgraded as eligible for funds as high as ₦100,000.

LOL. You can’t imagine how often I used these apps. I had about five that I used occasionally, and for a while, I was able to meet up with the two-week deadlines plus interests.

At what point did using these apps become an issue?

Quick back story: In 2018, my parents had a building project, and they made me the accountant. One of my responsibilities was disbursing funds to workers.

One day, a friend who was getting married asked for a loan of ₦200,000. I took the money from the building project and gave it to her. After the wedding, the agreed two weeks passed, and she didn’t have the money to pay up.

Workers on-site needed to get paid. I couldn’t tell them I didn’t have the money, so I went to one of the apps and took a loan of ₦200,000. But the loan wasn’t the problem.

What was the problem?

The interests. They broke it down into part payments that seemed doable, but I wasn’t paying attention to the interest as a whole. That was how I incurred debts that ran into millions of naira.

No. Multiple loans, but I was still unemployed and living off the generosity of my parents’ occasional ₦30,000 or ₦40,000. The money wasn’t frequent enough for me to pay off the interest on my debts, so I had to find another way.

What?! Did you tell your family?

How did they not find out about the PhD fees?

When a relative who worked in the university kept reminding me to pay before the portal closed, I borrowed money from my brother. I ended up losing interest in the degree.

I never paid my brother back, and neither of us have brought it up.

How were you able to go on for so long without getting caught?

The price of successfully scamming my entire family cost me my health. I was in and out of the hospital so many times. I developed asthma that got triggered by stress. Everyone was worried about me, but I was the only one who knew what was eating me up.

How much was this loan that you couldn’t pay off in four years?

In July 2021, when I was about to get married, I had to balance my parents’ accounts before handing them over. This was when I discovered that I had a deficit of ₦2 million I couldn’t account for.

Does your husband know?

I didn’t tell him. To date, he doesn’t know anything. If he knew, he’d probably reconsider getting married.

No. I couldn’t afford to default because the loan apps would frustrate my life. They’d either text or call my family and friends. The worst part is, I never spent a single dime on myself.

Every loan I have taken so far was done to pay off a debt.

How did you cope with the two-week deadlines?

The deadlines were so tight, and even when one of the apps started monthly payments in 2020, the interest increased because of the timeframe. You have more time to pay off your loans, but the interest incurred is ridiculous.

What was the turning point for you?

When I took a ₦250,000 loan. The monthly repayment was about ₦36,000 a month, but after agreeing to the terms and conditions, I saw that the interest was precisely ₦190,000. I had to call myself to order.

When the deadline was fast-approaching, I reached out to my friend, the bride I lent money to for her wedding. I didn’t do it to get help, I just needed someone to talk to.

After explaining everything, she gave me some money to clear the debt.

One million. We have an agreement for when I’ll start repaying her. I remember how the money she paid back was used to service some loans.

How much debt is left now?

I know there’s no way I can pay up by then, so I sent an email to them explaining my situation. Unfortunately, they don’t extend time frames without including a fee, and I can’t borrow any more to fix this.

What if they call your family?

Besides staying away from quick loans, I’ve learnt never to borrow to pay debts. It’s a trap, and many people are neck-deep in debt because of it.