My Money Mistake: I Spent My Rent On A Ponzi Scheme 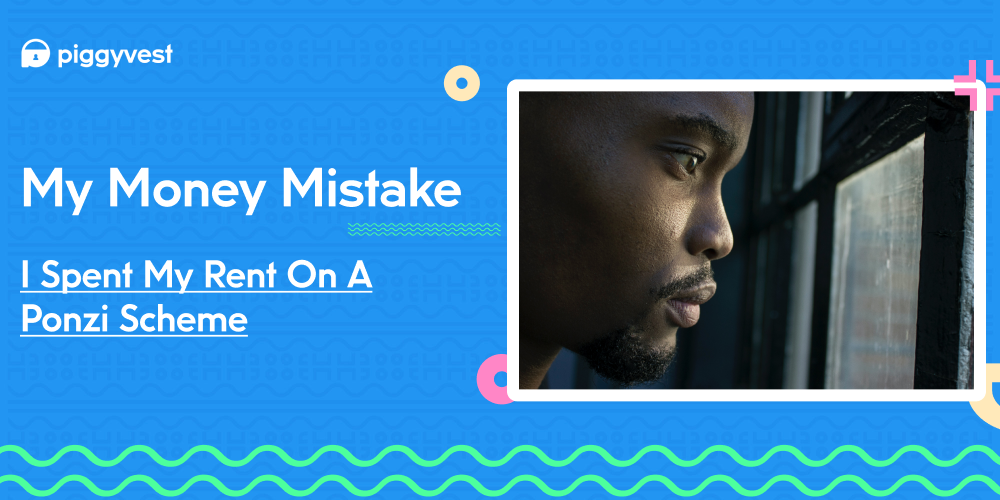 For this week’s episode of My Money Mistake, we spoke to a 32-year-old whose biggest financial mistake was blowing his rent money on a ponzi scheme. He talks about how peer pressure pushed him to the brink of homelessness.

MMM. In 2017, before starting an internship, I got into photography and was able to save up ₦60,000 for the gear I needed. MMM was a huge thing at the time, and my friend Oba* tried to get me to join. I turned down his invitation because I wasn’t interested. I wanted to use the money for photography.

How did that work out for you?

I doubled the money by the end of my six-month internship.

Well, yes and no. The company I interned for was a biotech company and they had invited professors from all over the world to attend an event. They knew I was into photography, so they paid me ₦90,000 to cover the event for them. By the end of my internship, the allowance paid plus the money for the event came to a sum of ₦120,000. That money was going to buy me my freedom.

At the time, I had a housemate in university, and I really wanted to live alone in my final year. It was a privacy issue. That ₦120,000 was the exact amount I needed for rent. That was when Oba came again with MMM.

Your friend is relentless.

I know. He came and was talking about the millions he made between the time he spoke to me, six months ago, and now. Then he showed me how much I could have made with the ₦60,000 if I had invested back then.

How did he show you the millions?

Word of mouth o. He was my friend; I had no reason to doubt him. Plus, I think they showed earnings on the site. Between the time we first spoke about MMM, Oba had signed up his mom and girlfriend. He told me what they had amassed in three months. I mentally calculated how much I could have made with my ₦60,000 as he kept talking. It came to about a million naira.

The ₦120,000 I made started to disgust me. It could have been so much more, I thought. I could have been a millionaire. Not sure if it was greed or the fact that Oba offered to add ₦500,000 so I could join, but I convinced myself that I had a few months before school resumed. This would give me time to make extra money.

Wait. What was in it for Oba?

Yes. I paid the money into the account of people I was supposed to, then the waiting game began. The plan was to wait for one month but a few days after I invested, my cousin in the UK, who gives me financial advice, recommended a book to me.

The Richest Man in Babylon .

I don’t enjoy reading so I got the audiobook. That was the beginning of my investment anxiety. The book hammered on one thing repeatedly regarding investment. It said, “Never invest in what you don’t truly understand.” Then it went on to give an example of a carpenter who invested in a diamond business. He paid some merchants to buy diamonds and they travelled and brought back glass. He didn’t understand enough about his investment so they ripped him off.

I started asking myself how much I really knew about MMM that I put my money in. That was the first lesson I learnt.

It hit me that the people who created these ponzi schemes did it for themselves. It’s a business and the idea of any business is to make money. Sure, people can get a little something but the most of it goes to whoever started the business.

Did all this financial wisdom happen a few days after you invested in MMM?

Yes. I was so anxious. The whole thing made me go from wanting to shorten the wait period to wanting to withdraw immediately. As we started the withdrawal process, people started putting online that they weren’t getting their money back. It caused a huge panic and the site crashed. My money wasn’t in MMM for up to a week before it crashed.

Omo. How did you pay your rent?

I had no rent money. I was flat broke. My housemate at the time offered to pay our rent as long as I promised to pay him back. This was not the plan, but I didn’t have options. While scrambling to look for the money, a friend came with another Ponzi scheme, Ultimate Cycler.

No. Another friend. He came and was like the entry money is just ₦12,500 and that we needed to take advantage of the opportunity before it crashes. The payout was ₦64,000, which was half of my rent. I really didn’t want to; I kept telling myself to be smart and walk away.

I didn’t walk away. I figured the entry fee was low and the expected cash out was half my rent. I was desperate so I did it.

The Richest Man in Babylon lessons in the mud!

LMAO. This was the time I learnt that ponzi schemes are not for the man called Abraham. I put in my money and was expecting the payout in two days but the site crashed a day after I put in my money.

What was your biggest lesson from this mistake?

But were there no red flags?

It’s a pyramid scheme. That is a red flag on its own. There are so many people at the bottom and you know they can’t all be paid. You just hope you aren’t one of those people who can’t cash out before the market gets saturated. It was a mix of greed and desperation.