Why I Left My 9 To 5 To Focus On Freelancing 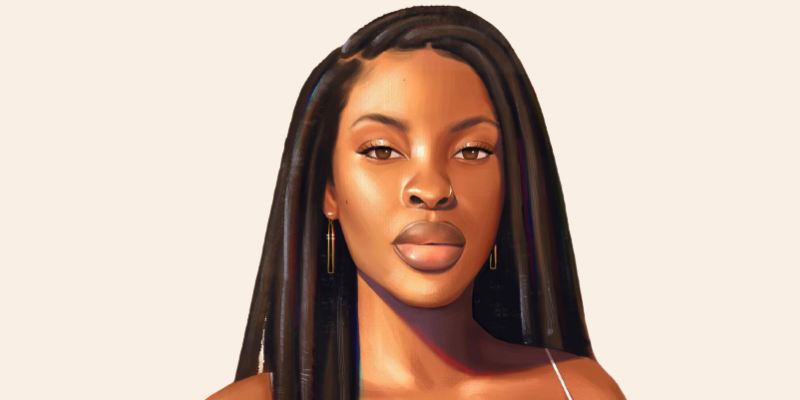 As we said in this interview, we at PiggyVest are not only interested in how Nigerians save and invest but how they earn as well. That’s why we spoke to graphic artist and illustrator, Renike Olusanya, about several subjects, including her income streams, her American book cover gig and why she decided to leave her 9 to 5 job for freelancing.

How does Renike describe what Renike does?

I’m a freelance artist. I sell artworks and produce commissioned works as well. I also do book covers and album cover illustrations.

What did you do before you started freelancing?

I worked with several companies for some years, including one that brought people from across the world to a concert in Lagos. I did their graphic design and illustrations.

At what point did you decide to strike out on your own?

At the stage where the 9 to 5 wanted to kill me!

I was living on the mainland and working on the Island. I was doing my freelance illustrating by the side and trying to balance everything, plus the stress of going to and from the Island. It took a toll on my mental health. I decided one had to go — my freelance work is what ended up staying.

Did you think you had enough money?

Leaving the 9 to 5 life was a survival move?

Yes. I couldn’t take it anymore; I was done. I didn’t think about the financial impact or if I was going to find another job. I didn’t plan; I just knew what I didn’t want: working a 9 to 5 at that time.

How did it work financially, making such a move?

I had saved up some money. My salary wasn’t bad. I also had one or two clients that patronised me all the time. I just decided to depend on them and see where it led me.

And where did it lead you?

It led me to paying more attention to my craft as an illustrator, improving my skill and putting my work out there. My 9 to 5 was taking a lot of my time, so since I didn’t have that, I had more time to invest in my side gig.

So I decided to create more artworks, and I put more stuff on Instagram and Twitter. My theory is that because the pandemic had everyone stuck at home, people had more time to scroll through their phones and look at things. From there, I got a lot of opportunities. People discovered my work. Procreate, which is the app I use to draw on my iPad, noticed my work and gave me a shout out.

From there, I got jobs from the finance space. I’ve not stopped getting requests since then.

So what are your income streams?

There are assets I create myself, and I sell prints of them. People reach out to me for that; I charge from around $30 and above. For portrait commissions, I charge $300 and above. Then there are the book covers.

Tell me about that.

Cut soap for me!

It has been going up. Doing book covers and illustrations brings me the most money because of my price range and the calibre of people that want to create book covers with me. I did one for Penguin Random House, one of the biggest publishers….

It is America’s biggest book publisher!

LOL. It was for Nicola Yoon. She wrote the book that was adapted into one of my favourite films, Everything Everything. They reached out to me one day, and I thought I was dreaming. They were like Nicola Yoon. I was like, “No way!” They said she saw my work on Instagram and wants me to create her next book cover.

The money was really good, but even if it wasn’t, I would have still agreed.

Of course. Give me a range?

I have done a couple of album and song covers that are not out yet. But it is usually book covers, inner-book illustrations, portraits and prints.

What are on the upper and lower ends?

The book covers are on the upper end; prints are on the lower end. The prints usually require pushing. The days or months that you don’t advertise that you are selling prints or talk about particular ones you’ve created, you don’t get a lot of money from them. I’ve made above $5000 selling prints.

You are now my hero. What is the most surprising thing you’ve found about running your business?

The fact that people continue to reach out. When I decided I was going to do this, what was in my head was that I would find a couple of clients that I would work with for a long time. But every month or two, new people reach out. There is always that fear…but for over a year, that has not happened. It shocks me.

I was going to ask about tough times, but it seems that has not…

Yes, that has not happened. And even if it happens, I’m very conscious of how I save, spend and invest. So, I will be safe if that happens.

How long would you be safe if that happens?

Hahaha. Probably six months. Until the next request. But it is not possible that I won’t get something in that time. I’ll be fine.

Great. So if you were to tell someone who’s thinking of doing the entrepreneur switch, what would you say?