How Alma Asinobi Monetises Her Knowledge And Experiences 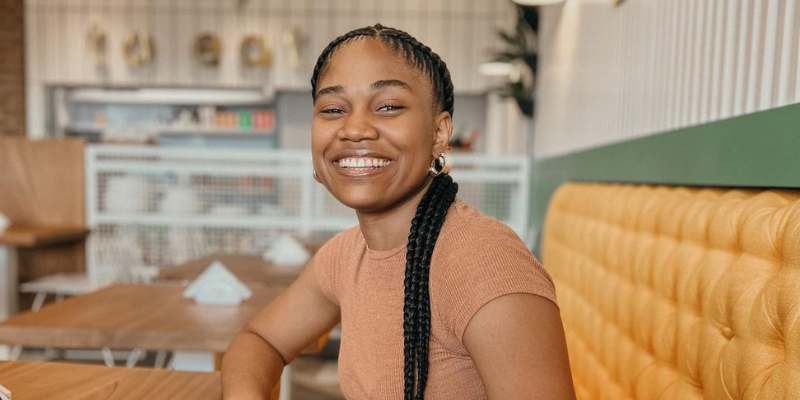 Alma Asinobi is a travel content creator and content strategist for tech startups, but only a few years ago, she was studying for a master’s degree in Architecture. In a recent interview, she told us about her move from Port Harcourt to Lagos and also provided a detailed account of her rise as a content creator.

I studied Architecture at Covenant University.

The thing is, I knew I didn’t want to practice architecture, but I went in for a master’s degree in the same course anyway.

I wanted to japa to Canada, but I applied too late and didn’t get in. So another plan had to come in. My mum came up with the most natural idea for Nigerian parents: Get your master’s while you wait.

That’s how I ended up with a bachelor’s and master’s in Architecture. I initially fought it, but I eventually convinced myself that it made sense to do the master’s immediately after I graduated. My mum said I could go to Canada afterwards. Thinking back, I don’t know how I fell for that.

Nigerian parents’ magic. Were you doing anything else?

Yes. I had started a thrift store business in school because of my interest in sustainability and the environment. I know it’s not really part of my brand online, but it’s something I really love. And I already knew how to sell — maybe because of where I am from…

I made some money — about ₦30,000 to ₦40,000 — doing the business even with all the logistical issues (because I was still in school). But towards the end of the first year, that had moved to close to ₦100k.

When did things start to change financially?

2020. Around the time I decided I wanted to start reading because I needed to stand on the shoulders of giants. I used to hate to read, but I knew that had to change. The first major book I read was Rick Warren’s Purpose Driven Life.

It felt like it was written for me specifically. The book helped me figure out what I wanted to do with my life. I wanted to teach. I like to share information and I am very resourceful. People always come to me to ask how to get stuff.

I think it is.

How did travel come into your life?

I had made it a part of my 2020 resolution to travel four times, but by March I realised the quarter was almost over. I asked two of my friends and off we went to the Benin Republic. We went on a Friday and came back on Sunday. I wasn’t sure how I was going to afford the trip, but I did it anyway.

I enjoyed it so much. It’s so close to Nigeria but so different. The culture, the language.

Yes. It was so good that I told myself that I wasn’t going to miss any other trip in 2020. But obviously COVID had other plans. On that trip I spent ₦45,500.

How do you still remember the figure?

[Laughs] I’m pretty good at remembering significant stuff, but I’ll explain why I remember this figure. It’s connected to a decision I made on the trip: I decided to write an e-book for anyone who wants to travel to Benin.

Thank you! It became my first digital product ever. I sold it for ₦1,000. I figured I would sell it to 10 people and make ₦10,000. I had about 3000 followers on Instagram at the time. But I put the book up for pre-order and 17 people had pre-ordered it by the time I was to release it.

I learned that people want to know how much things cost and I broke it down. Everything I spent was accounted for. And it was ₦45,500.

Oh, that’s why the figure stuck.

Yup. But a friend told me that the book was more valuable than my price, so I upped it to ₦1,500. As we speak, the book has been sold over 500 times.

Even the tweet announcing the e-book went sort of viral on Twitter and I got some buyers from there as well.

[Laughs] Anyway, school didn’t resume as expected based on all that was happening in the world, so my thrift business had to be paused. I cleared a room in my parents’ house in Port Harcourt to work on my dissertation. I also begged them to exempt me from chores so I could focus. My dad agreed immediately, but my mum was hesitant at first. She thought I was using it as an excuse to run away from chores, which I hated doing, but she eventually agreed and even did my chores for me.

That’s sweet. But wait, you didn’t take a job on the side?

No. I didn’t. The e-book’s success made me realise that if I took this content creation thing seriously, it could be bigger. I just knew I wanted to share stuff on the internet.

So I started reading a lot of books. My target was 40 books. I didn’t hit that, but I did read more than 25 books. I started to share some ideas in short videos that I posted on Instagram. The first video didn’t do very well. In fact, people started to unfollow me.

But I continued it for two weeks, and people started to come along. I gained 700 followers, which was a big deal for me. I also started to create text carousels from the things I had internalised from the books I was reading. People started to ask me questions about how to handle things.

Exactly. But after a while I became tired. I then decided it was time to put a price on my time.

Hmm. What did this mean in practice?

I created a course in four parts. It was called Story School. I taught personal branding, video content creation and two other modules. It was ₦10,000 naira for the entire course. I would teach over Friday, Saturday, and Sunday. 4pm to 7pm. I put an early bird incentive. That was ₦7500.

How did that go?

You and these 10 people.

[Laughs] You have to manage expectations. But to my surprise, by the end of the early bird period, 28 people had paid.

I was excited. My parents started to see what was happening. I couldn’t believe someone would give me ₦7,500 for something I knew and I wasn’t spending a dime on. It is still so crazy to me.

How much did you make from this?

I can’t give a specific figure, but it was around half a million naira.

Were you still in Port Harcourt?

Yes, but I had decided I needed to move to Lagos. The brands I wanted to work with were in Lagos.

Had any brands reached out?

Yes. One of the first times a brand reached out to me, I charged them only ₦5,000.

And that wasn’t the worst thing. I found out that the brand wasn’t even Nigerian.

My goodness! You live and you learn sha.

It’s so embarrassing. But I did work for other brands. Some sent me merch. I recall receiving a lot of lemonade from one brand, which I collected because I needed my parents to see the tangible rewards of my work.

Sharp babe! After the ₦5k-fiasco, what was your next charge?

I can smell the millions. Is travel also an income stream for you?

Yes, but it puts a hole in my pocket. I think about it differently though.

I got the idea from reading Seth Godin’s The Dip, which I recommend for everyone. It made me understand that scarcity is why people value things. Sticking to travel, despite its cost, is how my followers moved from just over 10,000 to just under 50,000. The scarcity of travel content creators in Nigeria makes my work more valuable.

Interesting. When did you move to Lagos?

That was 2021. I reached out to a friend who was working in tech and got an employment letter not long after. I needed to show that to my parents to convince them that their child would not starve and be homeless in Lagos.

How much was your salary?

How long did you last?

Why did you leave?

I was earning my salary for the month with one post.

And you did that in two years? Remarkable stuff. What are your income streams at the moment?

I run a consultancy for storytelling and content marketing for tech startups. I work with brands. And I sell digital products. Along with the one I mentioned earlier, I also produced an e-book detailing how I furnished my house in Lagos.

I got the idea after I received my seventh debit alert because of purchases I was making for the house. And because I was sharing the process on IG, people were in my DMs asking questions about prices and other stuff. They wanted answers and I wanted money.

I actually made two variations of the e-book. Within the first 24 hours, I had made over ₦200,000, which increased my furnishing budget.

Teach me thy ways, Sensei!

[Laughs] I have another e-book coming out specifically for content creators.

Which of these streams brings the most money?

My marketing agency earns the most money, followed by my work with brands.

Could you advise people looking to emulate you?

Yes. I think the first thing would be to realise that everything you need, you already have, and what you don’t have, you can get. Your personality is your main selling point.

You need to know that what you have is valuable to somebody. You just need to find that somebody.

Does this mean you have to go looking for them?

If you are putting yourself out there enough, they will come to you. But you may also have to pitch your work to people who need you.

Any final nuggets of wisdom?

Talking to everybody is talking to nobody. You have to talk to your tribe in a way that they can’t do without you or your content.